NO ONE AT CHUGACH ELECTRIC CONFESSES TO AUTHORIZING THIS OUTRAGEOUS LITIGATION!

On December 6, 2006 Chugach Consumers obtained a Superior Court restraining order that temporarily stopped the IBEW backed Chugach board majority from rushing through a costly labor contract. Two weeks later Chugach Electric sued Ray Kreig, its own former board president. We were also targeted in the suit along with our chairman at the time, Stephen Routh.

Our electric ratepayer group, of course, has long actively opposed high Chugach rates and waste at the cooperative.

We also filed (along with Ray Kreig) a formal complaint against the labor contract at the Regulatory Commission of Alaska. Kreig provided the RCA with economic information on labor and other costs that had been suppressed by Chugach management. No information considered confidential by Chugach was released by Kreig to the press or anyone except to the RCA which is Chugach Electric's own regulator. But that didn’t stop Chugach management from trumpeting propaganda that Kreig had breached confidentiality and released to the public documents provided to him during his tenure on the board.

The new pro-consumer board believes that a member owned cooperative should not be suing to suppress information but instead should be operating in a more open and accountable manner. It ordered that the previous board majority and Chugach management's suit be ended and hired another attorney that successfully negotiated a settlement.

Through slick lawyering and a massive expenditure of ratepayer money (over $80,000) Chugach Electric was able to maneuver seizure of virtually all of the files of the electric ratepayer organization which were kept impounded from May 11 to October 18, 2007. Here Chugach Consumers current chairman Ray Kreig receives records returned to his group after Judge Gleason ordered their release. 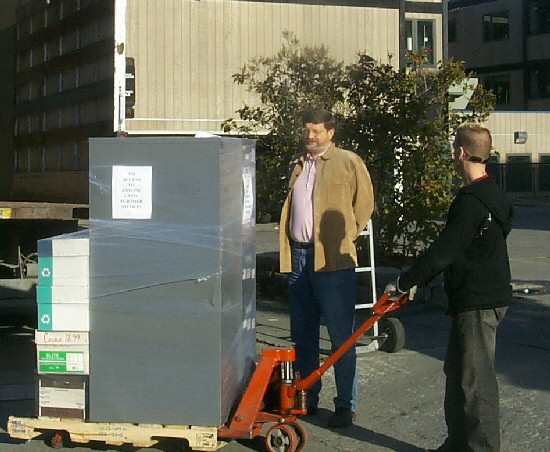 Further note:  It is appalling that Chugach Electric's lawyers were allowed by the Regulatory Commission of Alaska to reach into the RCA's very own document safe and extract the filing made by Chugach Consumers containing the evidence of Chugach waste and the labor cost analysis of the abusive contracts in the "Black Book".  The RCA was complacent in this maneuver that enabled Chugach to actively suppress evidence of its own wrong doing.

so severely burdening them with the cost of a legal defense that they abandon their criticism.”

Many states have laws that prohibit or discourage SLAPP suits. Alaska does not.

Chugach Electric used this "scorched-earth" litigation technique to harass its former board president Ray Kreig and the ratepayer group Chugach Consumers during cooperative elections in the spring of 2007 when they were trying to help pro-consumer candidates battle IBEW Union and management backed candidates for the board. The suit and impoundment of the group's records also prevented their practical participation in a rate case for which they had been granted intervener status by the Regulatory Commission of Alaska.

New Chugach Electric board majority comments on the lawsuit:

"The other attorney that was hired was frankly to the clean up the mess from the prior Board or whoever got us into the lawsuit, specifically the Chugach Consumer’s lawsuit. Nobody’s owning up to it because actually it was an ultra vires act. It was not formally and properly authorized by the full board. So whoever initiated and authorized that lawsuit is really on the hook." [Chugach Electric board chair Elizabeth Vazquez at 9/19/07 board meeting responding to Jeff Lipscomb who was former board chair when the subject suit was filed.]

"The sense I get about this case is that it’s a lot of emotion, it’s a lot of personal agendas, a lot of vindictiveness and frankly, it’s a case of David vs. Goliath. The Association having at its disposal many resources...was willing to spend in excess of $58,000...it is obvious that it wanted to squash any type of vitality or life out of an organization that professes to be pro-consumer. There appears to have been minimal, if no effort, at settling this case and in fact, the motive was to simply litigate to the hilt to eliminate what was perceived a vocal adversary in the community. I would say shame on the Association for using its resources in that way instead of trying to reach a resolution with Mr. Kreig and its organization...While there is a time and place for confidentiality of documents, the sense I get is that [Chugach Electric] has done all that it can to spread this confidentiality tent to the utmost..." [Chugach Electric board chair Elizabeth Vazquez at 6/27/07 board meeting.]

"The settlement puts to bed one of the sorriest, most embarrassing episodes of recent years. Everybody involved in bringing this action ought to be ashamed of themselves. We as an association have managed to spend a mere $100,000 getting even with a former director who took exception to a labor contract. Getting even via lawsuits is not in the best interests of this association, this board or its legal staff even though it makes you feel good temporarily. I want to insure this never again happens." [Chugach Electric board secretary Alex Gimarc at 10/17/07 board meeting]